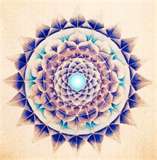 When I was a child, I would draw endless series of circular patterns that radiated outward in repeating shapes. I would take my crayons, and later, colored pencils and paints and color these drawings from lightest shades to deepest gradations of colors. I was very particular about this and could spend hours thus occupied. To my surprise, I won a few art contests with some of these depictions. They were always pleasing to my eyes, but I never knew what to call them when asked for a label to apply. I just knew that the patterns made a sort of logical sense to my eyes and made me feel centered and at peace when creating them. There was a sensation of pulsating energy as I would create the layers and patterns.


Fast forward into late teenage years and I was deeply involved in spiritual searching, reading every book on mystical teachings that I ran across, investigating various religions and spiritual practices. Eventually, I began to see similar patterns to those that I had obsessively created as a child. It turns out that what I was drawing could be likened to a mandala.


Mandala (मण्डल) is a Sanskrit word that means "circle". In the Hindu and Buddhist religious traditions, their sacred art often takes a mandala form. The basic form of most Hindu and Buddhist mandalas is a square with four gates containing a circle with a center point. Each gate is in the shape of a T. In common use, mandala has become a generic term for any plan, chart or geometric pattern that represents the cosmos metaphysically or symbolically, a microcosm of the Universe from the human perspective. (Wikipedia)

Depending on the age of those of you reading this blog article, some of you may remember the childhood game called Spirograph (TM).* Spirograph was a set of plastic wheels and templates with which you could create endless mathematical curves of the variety technically known as hypotrochoids and epitrochoids. (Wikipedia) Although a mouthful to speak, those shapes are basically representing the same beautiful patterns found in mandalas. 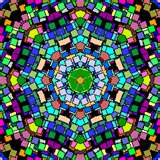 Another representation of this type of beautiful shape can be found in a kaleidoscope, which is a is a tube of mirrors containing loose colored beads, pebbles, or other small coloured objects. The viewer looks in one end and light enters the other end, reflecting off the mirrors. (Wikipedia) This was another device that could keep me entranced for endless hours, gazing at the ever changing patterns and colors inside that magical cylinder.

Why did I begin creating these shapes and designs at a very young age with no example to follow? I have my own thoughts on that. One thought is that something within me simply resonated with the geometrical logic found in the repeating shapes. Another thought is that I was recreating shapes from another time, memories embedded in the layers of my Spirit. Both thoughts make complete sense to me, as I have always been drawn to the concepts of Buddhism. 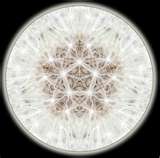 Similar repeating patterns can be found in nature; in flowers, in gemstones and crystals, in the whorls of certain lichen and mushrooms; in snowflakes, and even in the humble mature dandelion. Artists have reproduced these shapes in stained glass in majestic cathedrals and carved them into stone and wood. The majority of married females on this planet wear a diamond solitaire ring cut, shaped and faceted in such a manner as to reproduce this same geometric pattern within the depths of the gemstone. 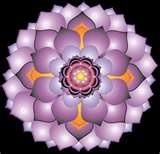 I am not a mathematically inclined person, so I cannot tie together all the theory and calculations necessary to explain these repeating patterns the world over. What I can say is that there is a strong presence of some type of quantum theory at work with these patterns. Mandalas have been created for thousands of years to aid in meditation and to drop the consciousness into progressively deeper states of relaxation and trance state. I can clearly remember feeling an inestimable sense of peace and calm as a child when I would intently create these patterns with my crayons and pencils. The finished products with their intricate layers of color would please me enormously. The shape that I most often created is similar to this photo with lotus flower-like petals radiating outward. 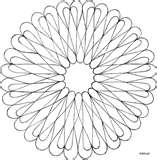 I don't know why this particular subject popped into my mind to write about tonight. I had just finished my evening meditation, so perhaps my thoughts drifted to a focal point that I often visualize to calm my thoughts. The more I thought about these shapes, the more similarities I came across, and the more it fascinated me. These shapes appear over and over in science and nature. We as human beings have recreated these shapes in glass, in metal, in gemstones, in fabric, on canvas, to please our eyes, yes. I feel there is also deeper purpose in the recreations of these beautiful shapes. From a mathematical standpoint, something of such linear balance has to resonate at a high and equally balanced frequency. Could the mandala shape, when done with clear intent and calm, pure heart, create a powerful energetic point? 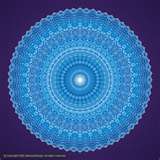 We are affected by the beauty of these shapes. Does this happen because they are pretty, or are they pretty because they touch our senses in a deeper manner than the most obvious ones? The chicken/egg theory is at work here to a degree. I don't have answers to most of these questions; they are more musings...ruminations on my part. I once listened to a wonderful historian on television who espoused the concept that much of the fascination and plain enjoyment of learning is that some basic mysteries remain, as yet unlocked to our inqusitive minds. This thought always makes me smile and embrace the simple pleasure of creating or witnessing something beautiful.

Whatever the reason was that drove me as a small child to create mandala-esque drawings is not completely known. Having been slightly different in mindset from that very early age, I look back and am rather impressed with the fact that I never deviated from my focus, no matter the questions or criticisms of those early drawings. There was something within that drew me deeply into spiritual studies that continue to this day. And to this day, grabbing pencils and sketch pad to trace out another whirling wheel of color and shape pleases me and centers me. Mandala memories remain a constant and continue to focus my consciousness as they appear to have done for others in centuries past.
____________________________
*Disclaimer: no financial gain occurred from the mention of the product Spirograph (TM) in this blog article.
____________________________

If you enjoyed this post and would like to read more, you can find me at Healing Morning blog.

As I ride the train to work I am silent, so too are a large share of the passengers. Books, newspapers, makeup application, Ipods (and the odd dozer!) – they all negate the need for interaction with strangers. That’s fine I suppose, who wants to struggle with uncomfortable conversation before your first double soy ‘ccino?


Personally I people-watch, a habit a picked up from my mum while trailing her and her friend on shopping expeditions. How people move and behave during silence tells great stories about that person. It makes for fascinating additions to my mental library of odd public transport occurrences….it would make great book fodder! Ive seen people cry in silence, Ive seen people dramatically pass wind! Ive seen break ups, and Ive seen chat ups, and the reflection in the windows is better than any late night TV drama.

But it often gets me thinking about human movement itself, and how it speaks louder than the idle chatter on the platforms, or the droning of the uninspired train driver over the PA.

I watched this video (above) today, and saw performers move in ways that normally defies convention. They also talked about how they communicated through dance – the control that their inbuilt passion had over their bodies was astounding. And I was reminded that our actions, however clichéd, always speak louder than words.

You can talk about your ideas, your inspirations, your motivators, your dreams, until dusk falls. But without measured (dance)steps towards an objective, it will always be just that – TALK.

Jacob said that when you take a step you have two directions; forward, or sideways. Id push this idea further by suggesting that the steps are always forward. If you make a move on a chess board, sideways is often a strategic move… so how can that NOT be going forward?! If you try to make a forward move and end up sideways, then that is an education, and that sort of knowledge is so valuable that it too, is going forward. Do you see where I am coming from?

We can all dance (no matter how daggy) but WHEN we move, the choices we make, define us greater than anything we could ever say. Im sure you’ve been saying something a lot. Now just go out there and boogie on down!!