We made the mistake of taking the slow boat, thinking it would give us a leisurely tour of the spectacular island-strewn waters of Ha Long Bay, Vietnam. Leisurely it was, so much so that after hours of winding our way among sharp, jutting rocks and lush green islands, we were now sitting in the pitch dark on a creaking wooden boat that had no running lights—well, that had no lights at all. Instead, a boy had climbed to the front of the boat with a flashlight that seemed to have faulty batteries. There were no lights anywhere around us, either, except for our own lonely light, which the boy had to shake occasionally to revive. The islands and rocks were invisible in the inky blackness until we were already upon them. I was recalling warnings in some of the guide books about pirates occasionally preying on tourist boats in Ha Long Bay. If there were any pirates in the area, we were surely easy pickins—although they would have had to locate us in the dark first. I wondered how much the captain of the boat could see—did he have cat vision, or bat vision? I could only hope he knew this area like the back of his hand, because floating dreamily through a labyrinth of tropical green islands by day had turned to navigating menacing rocks by night.

Full Disclosure: You can also (perhaps wisely) hop a fast boat and reach Cat Ba Island in one hour. The island has seen a dramatic increase in hotel construction in past years, mostly funded by overseas Vietnamese. But at the time we visited, things were still a bit more rustic, which made for more adventure as well.
Ha Long Bay (which supposedly means Descending Dragon Bay) in north Vietnam is dotted by, according to some estimates, 2,000 “islets”—which is to say, miniature islands of widely varied shapes and sizes. The scenery is stunning, and gliding through it on a slow boat can be an otherworldly, hypnotic experience. Our somewhat rattletrap wooden boat chugged along with a small number of passengers, including my sister and myself, as well as a French family. The boat operators used the small on-board space efficiently, cooking up a meal for us in the engine room as they piloted the boat. Old tires were scattered about the boat which appeared to be our life vests. On the way to Cat Ba Island, we passed floating fishing villages where entire communities spent their lives living on the water. After it turned dark and the boat plowed blindly on, a French passenger timidly asked, “Is this safe?” At that point, it didn’t really matter—the only way left was forward.

When we fortunately reached the island, a bus arrived to take passengers to our various hotels. Whenever the bus stopped, the driver put a cement block in front of it as a parking brake. When we finally entered our hotel room, ready to collapse after a long day, we noticed the sheets were dirty…as if someone had slept in them with muddy shoes. When we inquired about this, the proprietors responded by taking us to another room. The only problem was that in this hotel room, somebody’s possessions were still there. Unnerved at the prospect of other guests returning in the middle of night to find us sleeping in their beds, we requested a third room. In this room, the only problem was a non-flushing toilet, but otherwise it was clean, and completely empty of extra guests. I remember looking out the window into the alley below and seeing a sleek, fat rat the size of a medium-sized dog devouring something (probably a medium-sized dog.) Maybe it was some sort of water rat/native creature, but whatever it was, it was huge.
As you can tell, at that time, Cat Ba Island wasn’t about luxury accommodations. However, it was and still is about dramatic scenery: waterfalls, forests, hills, cliffs, caves, lakes, and sandy beaches tucked here and there among the otherwise rocky coastline. But the best part of Cat Ba Island is probably the breathtaking and nerve-wracking experience of getting there.

Also on my blog Strange Islands
Posted by Lynne Walker at 11:01 PM 2 comments:

Are Your Beliefs the True Barriers to Your Success? Unlocking Your Mental Filing Cabinet 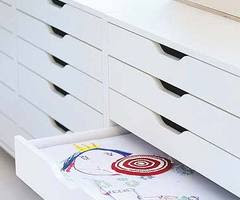 Humans have a limited capacity for processing information. So that means that in any moment there is simply too much going on in the immediate environment to process. What reaches our consciousness is only a fraction of what we take in. We are selective out of necessity and we don’t see things as they really are, but rather as we are. So things that are relevant to the beliefs we have about ourselves, and others, and the world pop out from a sea of other information. This is a selective process that occurs outside of our awareness to spare us from feeling overwhelmed.

So there is some information that we are totally unaware of being stored away. Beliefs about the way things are or should be, or about our own abilities can be filed away, but remain an enduring influence on our thoughts and actions.

One way of finding out what you have been subconsciously filing away is to ask yourself what your beliefs are about a particular topic and then force yourself to keep coming up with answers until you have exhausted the in- tray and you are forced to access your locked filing cabinet.

It’s no secret that the process of doing a PhD has been as much about self discovery for me as it has been a quest for the truth about emotional processing. So I want to know if my unconscious beliefs are a help or hindrance to my success.

To access my mental filing cabinets and to discover what my beliefs are about my abilities to finish my PhD I have forced myself to come up with a list of 21 responses to the following statement:

Regarding my abilities to succeed and finish my PhD I believe that:

2. I am smart enough

5. I have to persist

7. I block my abilities

8. I constantly put obstacles in my way

12.I need other people’s help

14. I must be independent

16. I won’t succeed unless I do it all myself

17. I fear involving others because they will find out my flaws

18. I hold on to the idea of perfection

19. I have to lose the idea of perfection to succeed

20. I need to put that energy into doing the work and assembling the team to ensure my success

What I have come up with although conflicting at times shows me that I already know that I need help to succeed, but that I resist it because I want to maintain a facade of perfection.

Some of my beliefs are affecting the way I am doing the work of my PhD. I find this information both surprising, and very useful.

It is only through the conscious mind that we can reach the unconscious beliefs that drive our behaviours.

What’s in your mental filing cabinet?