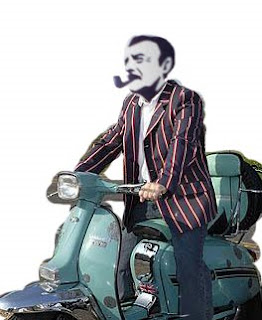 I'd like to thank Katherine for inviting me to join Writers Rising. I'm a 44 (as of December) year old writer who has been steadily creating since I learned how to write. My first writing implement was an Olympia manual typewriter; I learned how to use it in junior high from Mr. McAffee, an eccentric and often frightening South American gentleman who had the tendency to shout out "Heil Hitler!" just to see if everyone was paying attention.

My second writing tool was a Smith-Corona electric colored a sort of greenish brown. It had no brain whatsoever - no memory, no special effects. To make corrections you backspace, switch over to the correction ribbon, and type over the mistake. The letters were often out of line. I kind of wish I still had that typewriter - it presented such a beat-up and impressionistic typeface, it would be pretty retro-cool from a contemporary design point of view.

My third writing tool was one of the first line Macintosh home computers that I used when I was at my then-girlfriend's apartment - this was about 1985 or so. It was sort of mind-bending seeing my words appear on what looked like a black and white TV. The novelty wore off as soon as the relationship fell apart, and I went back to scribbling in journals like a proper poet should.

After some experimentation with borrowed memory typewriters and at one point an elderly S-C manual in a suitcase like journalists used to use (it had a blocky modernist font I think designers would kill to get their hands on now) which I had purchased from a yard sale, I got back to working on a Mac SE for the next few years. When that went the way of the dinosaur I hopscotched through a number of PCs, and there are great many .doc files from those years that are floating around somewhere, probably on 2 1/4" floppy disks.

At the moment I am communicating with you via my refurbished Macbook 15" running OS X v. 10.5.8. It's fairly close to the point of having outlived its usefulness, but I have little income to speak of at the moment and none to direct toward a newer machine.

I've got an awful lot of work done on this machine. I think it's because it's so easy. It's ergonomically easy, it's technologically easy, and since it was used I got it at a very competitive price. I've typed poems, songs, murder mysteries, horror, erotica, resumes, cover letters, emails to my mother, complaint letters, everything imaginable on this machine. It seems fairly advanced now, but I smile thinking of how we'll view these machines ten years from now. Things are going to be so different then I think we'll barely recognize ourselves.

Feel free to write in comments here about writing machines you've used over the years, what you're using now, and what you plan or hope to be using in the future.

Thanks again for making me a part of your group!