What do you believe?

Recently I was interviewed by a high school student for a class assignment. His topic was Religion: Creed, Community, Calling and he asked me a lot of questions pertaining to my upbringing, my exposure to religion, my parent's views, and my own beliefs.
In telling him how I've come to an agnostic standpoint, I realized a lot of things about my own belief system ... how it developed over time and why I don't feel guilty anymore about not
being religious.
My parents weren't as devout as, say, my grandparents.
We visited a temple once a week or once every two weeks (there wasn't any set day or commitment), mom chanted the Hanuman Chalisa (a specific prayer for the monkey god) every morning after showering (a practice she started when I was severely sick as a four-year-old and which she continues to this day), dad didn't eat egg or chicken on Tuesdays (it's a common custom for those who worship Hanuman), and we would do puja on Diwali (the biggest and most important Hindu celebration).
Aside from these things, I didn't see my parents fasting for every other god (with hundreds of thousands of gods to worship, they'd never be eating anything!), nor did I see them travel to specific places in India just to visit temples (as a lot of their peers did).
I knew I was a Hindu and that Muslims and Christians went to their own temples. They revered a different god and celebrated different festivals -- but that didn't stop me from sharing lunch with them.
In fact, I loved the sheermaal (saffron-flavored bread) a Muslim friend would get on occasion and had told my mom I wanted a church wedding when I grew up.
She smiled and said that's what Christians do.
"Does it mean we can't?" I'd asked.
"No, it's their custom. Our custom is different," she replied.
"But it doesn't mean we can't do something that's different, right?" I inquired.
She dismissed the conversation by saying, "No, it doesn't mean we can't. But there's a lot of time to your marriage."
I was only nine years old.
But even as mom and dad hung on to their beliefs, their religious customs, they never once forced anything down my throat. I celebrate Eid with my Muslim classmates and went to mass with my Christian friends.
The beliefs my parents tried to instill in me had more to do with humanism than Hinduism: don't be malicious, don't hurt anyone intentionally, don't steal, don't lie, respect differences (of caste, religion, beliefs), and be generous.
Some people say that's what Hinduism is about. It's a way of life.
Perhaps. But organized religion has made it so difficult to weed out the lifestyle from the customs. Customs that feel like shackles more than anything else.
I've never understood fasting for religious purposes or been able to come to terms with the hypocrisy of worshipping all these goddesses but then giving second-class treatment to women in real life.
Even as a kid, I questioned the rationality of religious edicts and growing up the questions never went away.
But I couldn't voice them without hurting a lot of people. You see, while technically one has the choice to follow a religion (or not!), our social structure doesn't allow us the guilt-free liberty to exercise that choice.
While my parents wouldn't force me to go to a temple, the general expectation would be that I'd accompany them. More so with my in-laws given how overtly religious they are. They'd be hurt if told them I questioned the existence of god. More so because I am a woman.
Men are supposed to be progressive and liberal. Women are supposed to be the moral compass and leash men in.
I wouldn't be able to have any rational discussions with them and at the end of it, it would come down to a question of faith.
Their faith in something that defies explanation. Mine lying within myself and those around me.
Some people might think that my coming to the United States prompted this sudden change of heart. Not entirely true.
My belief system didn't change per se, but my detachment from organized religion intensified.
In Iowa City, I didn't feel the "need" to go to a temple or to pray ... and with that realization came a sense of freedom. I felt that I could talk to people and question the existence of god without fear of repudiation.
I understood that fear was the main reason why people were so religious ... fear of family, society, failure, death... Religion provided folks with a support system. A false sense of security but a very real sense of community.
I didn't need that, but without asking for it, I automatically got affiliated with another community -- that of the non-believers.
And it certainly wasn't a sudden change of heart.
It was a series of discussions with my husband and with non-Indian peers and colleagues that allowed me to explore my beliefs and challenge the ones I had grown up with. 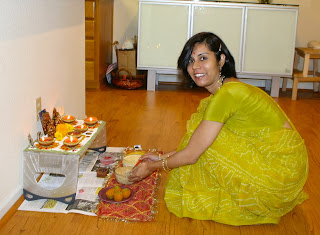 The only "religious" thing I still do is the Diwali puja -- folding my hands and chanting hymns I don't understand. And the one and only reason I still perform that annual ritual is because it's comforting.
I am halfway across the globe from my family and all the memories of that festival have centered around that ritual...it is those memories that I harken by going through the motions at home.
Some people have told me I'm spiritual. I'm not sure spirituality is an all-encompassing general term ... Everyone has their own take on spirituality and what it means to them.
I still haven't deciphered what it means to me, although others have told me that my travel experiences, my writing, and my thirst for knowledge are all the things that connect me with my spirituality. They tell me it's my calling.
For me, though, this whole spirituality thing is still inconclusive.
So, what do I believe? I believe that everyone should have the opportunity to explore their self before choosing which (if any) religion or spiritual belief to subscribe to. And it should be ok if they don't subscribe to anything. We don't have to have names and labels for everything, do we?
Self awareness leads to self confidence and when you know your self and know the reasons why you're doing what you're doing, life automatically becomes more meaningful.
You stop living in fear and you give to others not because you're told to, but because in your life journey you have come to realize that it is the right thing to do.
We spend so much time blindly following customs and traditions in the name of religion; we foster hatred for those who follow a different religion, and yet we don't fully understand our own belief system.
We don't know who we are, what motivates us, what inspires us, what our purpose in life is.
I believe in myself and in humanity. I believe all of us have good hearts.
If each of us took some time to introspect, to reflect, and to question our actions, we'd be a much more peaceful world community.
So, what do you believe?
This article is also published at Desicritics and can be found on my blog.