The Rains May Fall

Laying my head back I close my eyes. Corralled tumbleweeds are given free range. The wind is howling. It is going to rain. Holding the coffee cup in my hand I watch the curtains of the day close and the rain descends. The tumbleweeds take a sharp turn and gather up the dust of past rains. There was the Conspiracy Rain in my early twenty’s. Late afternoon, the pinks of the sunrise were peaking out. The radio played one of those songs that makes you laugh and cry as memories tap on your heart like the rain on the windshield. I pulled into a parking lot, parked the car and opened the door. Finding just the right spot, I walked over to the perfect puddle of rain and jumped square in the middle. Just one jump was all that I needed.
Then there’s the rain of the Benevolent Gods. While on a five month journey cross country on motorcycles, a severe band of rain squalls found us along one of those unending stretches of Texas highways. Unable to see we inched along until we found an overpass. Motorcycles safe from harm, we scaled the cement wall and popped a squat. There we sat in our bright yellow rain slickers soaked to the skin and pouring the water out of our shoes. Luckily we had a few cinnamon rolls left over from breakfast. You’d be surprised, when you’re hungry, how your mind can conveniently not notice the only food you have is as soaked as your jeans. As we carefully portioned out little pieces, as always with a picnic, the ants found us. I tossed a couple of crumbs away from us hoping they would follow the trail and leave us alone. Soaked, hungry, cold and wet I found myself drenched in laughter, almost falling down the cement overpass wall. Would they go back to their ant hill and tell the others about the day the Giant Yellow Cinnamon Roll Gods visited and gave them mana?
There’s also the rain of the Not So Good Helper. Ever have that experience of watching a car accident happening and there’s nothing you can do? Watching the young construction helper work on the deck was one of those experiences. You just knew this was not going to be good. The day had been beautiful. When night fell so did the rain. With the rain came the flood streams into the house through the basement windows. I now understand the Little Dutch Boy nursery rhyme. Standing on chairs, step ladders and the back of a recliner I tried to abate the flooding as best I could. The rains lasted all night as did the towel vigil. I remember the combination of panic and anger welling up inside me with its own flood until my inner dam burst and I yelled out to my deceased mother “I could use some help here Mama!” With that plea, I dropped my weary arms, watched the water pour into the house and had to laugh.
Finally there is always the Rain of Tears. We’ve all had those days. The Rain of Tears when the events of life so overwhelm you yet offers no reprieve, no sanctuary nor place to hide. Lest we think life malevolent or cruel, the skies open, the rains fall and we stand composed and camouflaged with our tears.
Yep, it is raining tonight. Holding the cup of coffee I notice the tumbleweeds have settled. Alternatively, they simply could be plotting. Whatever their intent, I shall go outside and listen to the rain. I shall tell the stars, hidden but always there, to bring the joy of a mud puddle to those whose hearts are heavy. I will tell the clouds as they continue their course to feed those who are hungry – physically, emotionally and spiritually and keep them safe from harm. And to the ever present moon which is partnered with the sun, I will instruct these sentinels to seal and heal the broken hearts and those who are crying – silently and in the rain. They do not have to be so strong that they can only cry in the rain. Yes, it is raining tonight. This is good. Every drop that falls has a purpose.

Escape From Bombay (written circa 1993) 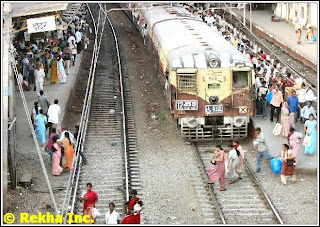 Bombay hit us the instant we stepped off the train. Millions of people ran around in disorderly chaos. The air was thick with breath. Our main aim was to get to Bombay Dadar and depart. To get there we had to risk the local services which are a cross between Network South East and the Tube. The train doors never close and crowds rarely wait for the train to stop before they jump on and off.

Bombay is India’s biggest city with an ever increasing population of ten million, 3000 a day arrive in search of hope. It is the city of fortune. A metropolis of corporate enterprises, businesses, the media and India’s film industry. As a direct result of all the hope it offers it is probably the city with the worst poverty my little eyes have seen. Miles and miles of ghettos and slums line the outer and inner city. Some are run-down and some are enterprisingly green, with yards full of lush green herbs; but they are all poor.

We made it to dastardly Dadar to discover that the waiting list for the waiting list for a reservation was fully booked. Onwards and upwards. Trains, crowds and crowds; lost looks and a million faces, colours suspended within a dusty, musky, stale smell. More waiting, asking questions to puzzled eyes. Eventually Bombay Victoria Central Reservations. First train to Bangalore at 10.10pm; six hours to kill. What do we do? Jeremy deposited me in the refreshment room while he went to phone Aeroflot to try and change the flight.

“I speak English.” I looked up. A British born Indian named Clayton chatted to me, tried very hard to buy me a coffee and spilt dahl on the guide book. The conversation was somewhat limited; essentially to do with the geography of the U.K and where I lived in relation to London. Eventually he left to further his geographical knowledge with another unsuspecting tourist.

Where is Bombay Kurla? At 7.00pm we walked straight into “Rush Hour”. Within seconds of standing on a deserted station we were surrounded by mad, foaming at the mouth, commuters, all of them desperate to be on the first train to Bombay Kurla even though a second was due a minute later. As the train was arriving the crowd surged forward; Jerry and I, with the help of an Indian business man, held back against the torrent of bodies, barely able to remain standing on the platform. Sedately we boarded the next train.

The forty minute journey allowed us to watch the city tick along. A snapshot look into the lives of thousands. Bombay life at the close of play seemed very soothing after our hectic day. We arrived in Kurla two hours before the train was due to leave. We sat on the platform, drank chai, ate plumcake and teased the chai boys. The warm, sweet tea refreshed and energised us. The station was like a huge aircraft hanger in the middle of suburban Bombay. The atmosphere was much more relaxed than the centre of town. The hours passed quickly and pleasantly.

The Bombay Kurla - Bangalore Express arrived. It was to be it’s virgin journey. There was great celebration as the guard handed out coconut and sugar crystals. We had a four berth carriage to ourselves. Bliss. With our ten rupee (25p) bed rolls we settled down in crisp, clean, sheets and slept.