Every year, during the first weekend in August, tens of thousands of Vietnamese-Americans descend on the small town of Carthage, Missouri to honor the Virgin Mary for helping Vietnamese boat refugees safely reach the United States more than thirty-five years earlier. 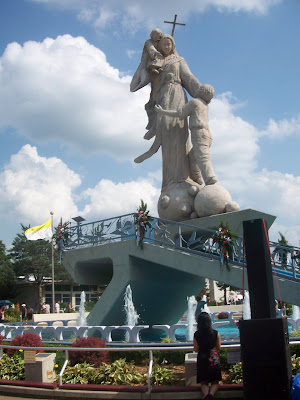 One of those refugees was Michael Vu, who now lives in Dallas, Texas. He was “eight or nine years old” when he fled Vietnam with his family. “My dad orchestrated our escape. My oldest brother left first, trying to go before us and prepare for us. His name was Vu Quang Thanh and unfortunately the China Sea took his life. He was on a boat with about 100 people, and they all perished, they were never found. His name is on the wall in the Prayer Garden. My dad is still looking for him, still hopes to find him, but I believe he’s dead.” Michael Vu shared this story while searching for his brother’s name among thousands of others on plaques in the Prayer Garden. 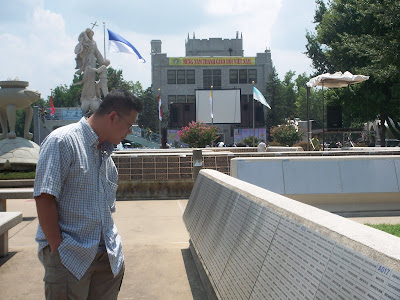 “When the priests here at the Carthage Congregation say daily mass, they pray for these names in this Prayer Garden. They are both the dead and the living. People who need prayer in their lives. For people still in Vietnam who live under hardship, who weren’t fortunate enough to be able to come here. This is the best place to come and pray for them. Family members gather here every year and pray for one another,” Michael said. 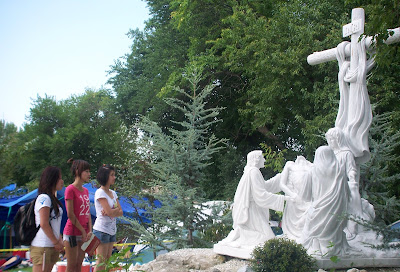 The Congregation of the Mother Co-Redemptrix organizes and hosts the gathering each year on their grounds in Carthage for one simple reason: the Congregation shares the same harrowing story as do the attendees. In Vietnam in 1975, under orders from their superior, this group of priests and brothers jumped into boats and headed out into the open sea. In the midst of chaos and gunfire, all the members of the Congregation of the Mother Co-Redemptrix escaped and eventually made it safely to the shores of the United States. 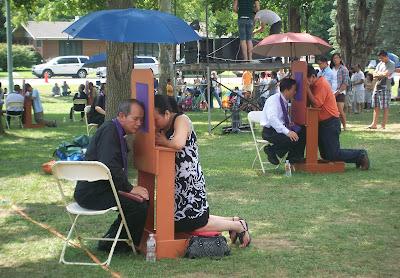 Though members of the Congregation were scattered in refugee camps and on military bases, they were eventually reunited on an un-used seminary campus in Carthage, Missouri. In 1977, a couple of hundred Vietnamese from nearby cities like Kansas City, St. Louis and Springfield gathered on the seminary campus in Carthage for a day of recollection to express devotion to the Virgin Mary. The numbers began doubling each year, until now approximately 70,000 Vietnamese-Americans make the pilgrimage to Carthage to honor the Virgin Mary along with the Congregation. 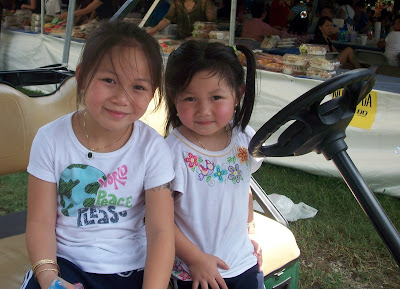 “We have a very strong devotion to the Virgin Mary,” Michael Vu agreed. “As we left Vietnam, we prayed to Mary to take care of us. We had a priest on our boat. We had two boats of people. There was a curfew in Vietnam, so we left at dawn. As we left, sirens started going off. North Vietnamese soldiers stopped us. There were about 60 to 70 children below, including me. The soldiers came aboard and questioned us. The priest said, “We’re hungry, and we’re going fishing.” There were fishing nets on the boat. The soldiers let us leave. We believe that praying to the Virgin Mary helped us escape Vietnam. Everyone on the boat believes it was a miracle we escaped. We arrived in Huntington Beach, CA We moved to Wichita Falls TX and we heard about Marian Days there. We felt like we had to go. We go every year. We’ve never stopped. We will definitely be here as long as they have it. It renews our spiritual life. Everyone who comes here has the same unity in their heart, one goal, devotion to Mary. It helps us through the year. It has helped us adjust here in the U.S. We didn’t know anyone, we didn’t know English. There are seven surviving brothers and two sisters in our family, and every one of us received a four-year college degree in the U.S., except for the youngest son who has Down Syndrome.” 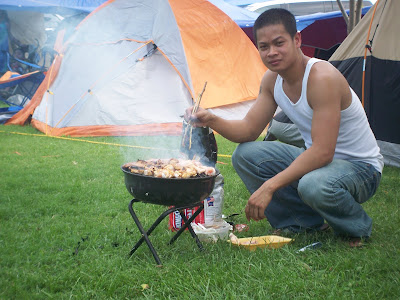 Over time, “Marian Days” has become a cultural event attracting parishes, families, and communities from all over the United States. Included in the festivities are Vietnamese food, both traditional and contemporary music, open-air confessions and masses on sloping lawns, speakers scheduled over several days, and a procession through the town with a statue of Our Lady of Fatima. And although the Congregation hosts the event, volunteers from parishes across the United States do much of the work, including staffing the endless restaurants and food stalls sprawled beneath tent awnings. 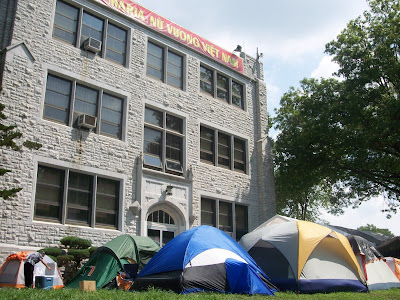 Marian Days, while growing from 200 to 70,000 attendees, has evolved over the years and included some growing pains. At one time, wall-to-wall people elbowed for a space to sleep on the seminary grounds and spilled over into the small, bewildered town--and at times the socializing aspect threatened to overshadow the spiritual one. But many of the social tensions have been resolved and the facilities expanded and upgraded, including the addition of showers, restrooms, a Prayer Garden, Stations of the Cross, and the Vietnamese Martyrs Auditorium. In addition to camping out in tents on the seminary grounds or filling nearby motels, attendees also set up tents on the lawns of welcoming locals, some of whom invite the same families into their backyards year after year. Jim Kerr is one of the locals who likes to attend every year “so we can eat something exceptional. I just ate pork intestines and it was very good. We love the Vietnamese iced coffee with sweetened condensed milk.” 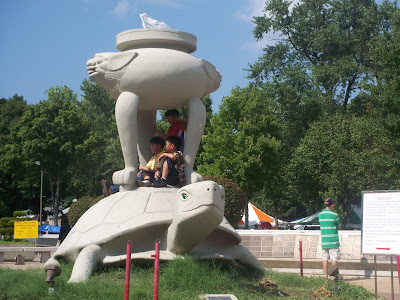 His wife Amy recalled, “One year it was raining. We were with our three daughters. We were getting rained on. A teen boy called over several of his friends with umbrellas—they escorted us to the food and kept us dry. One of our daughters grew up going to this, and got to know the people at the parish who run this restaurant (Queen of Vietnam Church in Port Arthur TX). After she was grown, she moved to the Port Arthur area and knows the same people there now.” Doug Huynh from Hastings Nebraska fled Vietnam in 1975 when he was eighteen. But he says Marian Days is about more than the past. “When you have a hard time now, you ask Mary for blessing. We come to visit her, to pay our respects and agree to come back. There are Vietnamese from all 50 states, Canada and Australia. We meet other Vietnamese people from all around the country. Some families drive 24 hours—8 hours is easy, we can’t complain. My mother-in-law listens to Bible talks and talks by priests. My kids like to hang out with other kids. There is good Vietnamese food.” Tai Le is one of the teenage boys from Queen of Vietnam Church in Port Arthur who comes every year to work in his parish’s Marian Days restaurant. “Our parish has a sign-up sheet and we volunteer to work here to raise funds for our church. We also come for the experience of meeting other people and to get to know our faith. The elderly here share their stories and they explain we should go back to Vietnam to learn our history. They tell us you should know history or it will repeat itself. My mother is very devoted to Mary. I choose to go to church every morning at 6 am at home. I don’t expect any rewards when I come here. I just come here to serve others.” 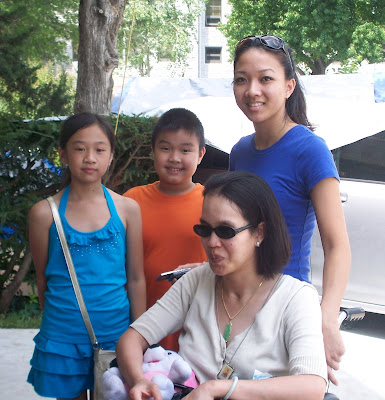 Duyen Nguyen from Arlington TX was blinded in a car accident. “Since 2000, my parents have come to pray for me. Miracles do happen. The doctors said I might see again. One day perhaps I will see again and God will bless me with a miracle. We go to mass here and everything. We go to retreats to listen to speakers. We go to pray and bless ourselves with holy water. Our parents volunteer here. Our church runs a restaurant here. Parishioners volunteer, raise funds for church. We also come for fun.” Daniel Tran of Rochester, Minnesota floated in a canoe with 29 people for 20 days before reaching Hong Kong. Although a Buddhist at the time, he now attends Marian Days every year as a Catholic with his wife. Indeed, his wife, Yen-Huong, says many Buddhists come to Marian Days as well. Also posted on Strange Islands
Posted by Lynne Walker at 10:11 PM 3 comments: