Somehow, in the middle of this wide, landlocked plain, we have made our way to a tropical island.
An Italian volunteer named David is visiting the Thai village where I teach English, and he has come with Pen, Kanjana and I in search of this strange little island. I’m on the back of Pen’s motorcycle and David is riding with Kanjana. We’re tearing along back roads, surrounded by acres of rice paddies. We’re like ants struggling to cross vast, green tracts of earth. Pen and Kanjana have both been trying to explain the significance of the island to me, and I am struggling to understand their Issan-laced Thai as they shout over the sound of motorcycle engines and wind. David, meanwhile, is shouting to me in his Italian-accented English. I’m shouting back to him, in American-accented English, passing along whatever spotty information I can glean about this elusive island we are racing toward.
Kanjana and Pen shout a mile a minute over the wind and flood me with tantalizing, incomprehensible details about the mysterious island. David says to me, “What did they say?”
I reply thoughtfully: “I have no idea. Something about an island.”
Pen steers her motorcycle off the road and we putt-putt to a stop. Ahead of us is a small wooden bridge, which we’ll cross on foot. And I see that all that they have been shouting about is true: In the midst of this barren plain sits an oasis, floating like a dream. We dismount the motorcycles at the edge of a serene green lake. In the middle of the lake is tethered a compact little island, every square inch of it bristling with towering palm trees. The palm trees that cloak the island are unique, Pen and Kanjana explain. They grow only here, on this small island, in the middle of this desert, in the middle of nowhere.
“This is the only place these trees can be found,” Pen insists. “They won’t grow anywhere else. They have tried to transplant them elsewhere, but they failed.”
The impossibly tall trees look thick and ancient and strange, nothing like the youthful, slender coconut trees I am used to seeing scattered gracefully across the rice paddies. What they are trying to tell me, I realize, is that this island is a mystery. These trees are a miracle. Why does this thicket of trees grow only here and nowhere else on earth? Of course, I have no way of verifying the fact that the trees grow nowhere else. It seems a little suspect, but I cheerfully agree with them and enter the realm of the mystical.We leave the motorcycles in the parking lot. We cross the footbridge whose handrails on both sides, I notice, are a long, unfurled serpent complete with scales. But serpent handrails are not an uncommon sight in Thailand when leading to temples. The naga (which I believe was a 7-headed cobra) is widely revered for sheltering the Buddha while he meditated on his way to enlightenment. 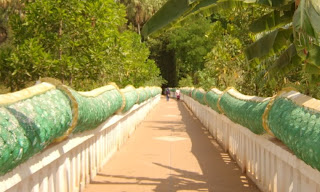 Pen lowers her voice and passes on another mysterious bit: A story about a Thai man who was hired to show outdoor movies on the island all night long. The crowd who gathered to watch the movie was silent and odd. The man showing the movies had to be out by 4 a.m., he was warned, or he might never leave the island. When the man went to leave the island, he had trouble finding his way out. He eventually made it off the island, and the strangely silent movie fans, he learned afterward, were ghosts. I’ve heard many American versions of the encounter with the stranger who turns out to be a ghost, but I like this Thai twist on it.
We step onto the island and instantly sink into hushed, dense forest. The light above us filters weakly down. A Buddhist monk slips silently past us, and Pen, the lone Buddhist among us Christians, leads us reverently along a twisting path deep into the trees. At the heart of the island pulses a silent spring. Here is the heart of the mystery. The four of us lean over the deep, green pool and peer in. The water is murky, and the well is, perhaps, bottomless. I can’t be sure, but I am looking for the giant snake that dwells therein. In Buddhism, of course, snakes don’t have the sullied reputation that they have in Christianity. In fact, they often represent the sacred. A giant, sacred snake dwells in this pool, and there is a whole, elaborate story about how it got here. Pen is unraveling the tale and I’m struggling desperately to understand her Thai. I hate the way the details escape me. Who knows what I’m missing?
But I understand this much: This is why the miraculous trees thrive in this arid plain. And this is why the water in this well contains curative powers. Because of the special, sacred snake coiled down below. Pen leans forward and cups some of the water in her hands. She drinks it deeply, and anoints her own head as well. She urges us to do the same. But I can’t help it: I’m not afraid of the snake—I’m afraid of the murky water. Pen’s immune system is up to the challenge of local water, but mine is not. Maybe the waters really are mystical. But I am not Buddhist or even Thai. So will these opaque waters heal me or afflict me? One part of me is intrigued by this spooky spring, and the strange story, and the unsettling possibilities that this whispering island contains. But I am also feeling intensely practical, so I decline to drink.
Long after leaving the tiny island and the village, I learn (or confirm) the details. We had visited Wat Kham Chanot วัดคำชะโนด. It’s considered an “entrance to the water world”, or maybe the underworld--the dwelling place of a sacred serpent. The monks inhabiting the island are devoted to revering the special serpent, and the locals do indeed consider the area sacred. My memory of that day is that almost no one else was around except a stray monk or two. The flat rice paddies surrounding the island were also empty. There was indeed something otherworldly in the air, although maybe the moody atmosphere was due to the dense forest and deep well. 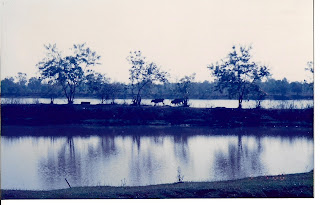 Some say the serpent has a “hiding place” on the island. On that day, Pen and Kanjana clearly believed the snake was hiding at the bottom of the well. Or was the well the entrance to the underworld? No matter—I comprehended their Thai well enough to get the picture, and the eerie locale is still with me to this day. This post also appears on my blog Strange Islands.
Posted by Lynne Walker at 3:35 PM 1 comment: