365 Lessons-Lesson 172: Keep Your Childhood Memories, But Know That Every Moment There Is A New You 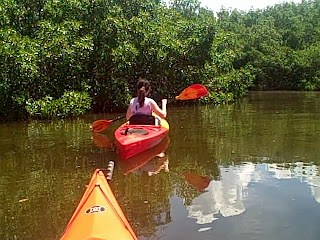 Last night my dad went to bed and I stayed up a little longer. I pressed my face against the glass window in the dining room and stared out at the Gulf waters. My dad lives right on the water in St. Petersburg, Florida. Palm trees rustled in the wind. The rippling of tiny waves in the distance made me feel calm. I stared straight ahead for what seemed like a long time. Two flashes of lighting appeared by the old smoke stacks in the distance. The stacks my father mentioned would be torn down anytime now. They were using a gas system now and the stacks wouldn't be needed any longer.

The silence throughout the house made me lonely. My mind filled itself with all the memories of my time here. Like the time when a possum got in the house and my friend Sara had to capture it in a laundry basket and let it loose out the front door. I remember giggling with my friends in the upstairs bedroom, telling ghosts stories until all hours, spending endless hours in the pool, putting tin foil on my sunglasses with my friend Lena thinking it would reflect the sun more and make our bodies turn brown, water skiing behind my dad's tiny Boston Whaler. Boats, lotion, water, friends, laughter, outdoor dining under the umbrella, lizards, crickets, cockroaches...memories just came flooding in like a huge tidal wave and then passed and left me standing there with the awareness of the cool tile under my feet and the fact that it was very late.

I wandered upstairs to bed. I kept the window blinds up, turned off the light and let the sound of the palms and water soothe me to sleep. 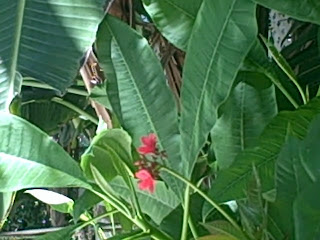 I woke up and my dad already had the coffee on. We chatted a bit, had a little breakfast. The time goes so slow here. It's good. There's no hurry to get anywhere and my dad and I really didn't have any big plans today. Suddenly I said, "Maybe we can take the kayaks out." My dad looked at me and said, "Sure!" We walked to the side of the house and dad noticed that an old hornets nest was inside one of them. Cockroaches scurried around the bright orange plastic which seemed to magnify them.

We carried the kayaks out and dropped them on the lawn and dad hosed them off. We dropped them down from the cement wall onto the beach and slid them off into the water. I flipped off my flip flops and sank down with my bare feet into the white sand. We were off.

Once out drifting on the water, my dad tried to calculate how long he'd been at this house. He figured he'd been here since he was 39 years old. I'm now 40. It didn't seem possible that my dad had settled into this house at an age younger than my present age, but I guess it was true. As we paddled along, my dad pointed out an Osprey's nest on a boat marker. The Osprey cackled at us, thinking we were prey to it's offspring. We were now out in the open channel.

"Yeah, I've been here a long time. I'm going to miss it, no doubt there," my dad continued, as if the pause gave him time to reflect on what a wonderful place it has been for him. Soon, he will be letting his house of almost 30 years go for life in a retirement community.

We continued on in silence in our respective kayaks. Every now and then we'd drift together and make a remark on our surroundings. We watched enormous pelicans near the Mangrove trees devour entire fish, the seagulls would follow close behind picking up any remains. I watched my father silently paddle in front of me. 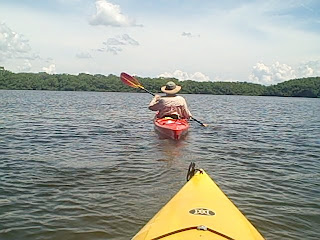 I wanted to seize the moment. I didn't want things to change. I wanted to freeze time. Just as I was thinking this, my father was swallowed up by Mangroves. He had entered the Mangrove tunnels. 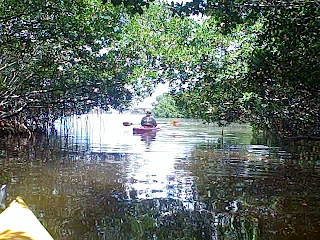 Huge tunnels were formed by the trees and you could kayak through them. Inside, under the shade of these trees, there was a feeling of being far off on some ancient expedition through the Amazon. It was as if we had gone back in time. Once out on open waters again, civilization returned instantly. People zoomed by in speed boats, fisherman near by pulled up their nets, jets flew overhead.

Sweat poured from my brow in the final stretch back to the house. It must have been 90 degrees outside. Good thing I had suntan lotion on. We pulled the kayaks up onto the grass again, pulled off our sweaty clothes down to our bathing suits and jumped in the pool. The water cooled me instantly. 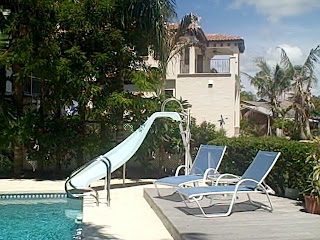 Later we sat under the shade of the porch awning and ate leftovers from the night before. I know things will change. I've always known that, but somehow, this time, I want to hold on to each moment.

Also published on my blog Lessons from the Monk I Married
Posted by Katherine Jenkins at 8:00 AM 1 comment: