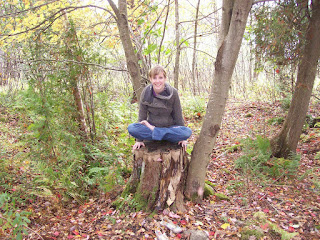 Hello! I am so honoured to have been asked to be a part of this sharing and supportive space.

Honestly, I was completely surprised by the concept. "Me? be part of a Writers' group?? But... I'm not a Writer capital W..." It's strange that I'd think this of myself, as with a bit of reflection I realized that at one point in my life I had wanted to be a Writer.

A Canadian, through and through, I grew up in a tiny lobster fishing village in Southern Nova Scotia (population 500, well 499 now). As a child I grew up a part of two very disparate cultures- Acadian (think "cajun" origins, with more French) and Anglophone. Attending a non-private/sorta selective Acadian elementary and highschool completely shaped the person I am today. Heritage and culture are so incredibly a part of who I am and family means everything.

I loved to write and sadly was an odd enough little person that the social trappings of school from primary to 12 were always difficult. As a result, I read and wrote. I remember writing a "book" complete with chapters and "art" in grade five about a trip to New Zealand (which I researched extensively using my encyclopedia... yep I was a nerd). Sadly that saga was not published...

After high school I moved to New Brunswick and quickly learned that English Lit was not for me. I also learned that my writing was terrible... and worked hard to perfect the whole "psychological" way of writing. I graduated with an Honours in Psychology and a minor in French and left my writing dreams firmly behind.


Afterwards I moved to Montreal and completed a Masters in Speech-Language Pathology. This city (and the subsequent crazy love quests and culture) inspired an outburst of creative songwriting. I wrote my favourite melodies and lyrics while alone in my tiny room on Rue Papineau. How I adored Montreal.


Cue a move to central British Columbia (the Okanagan) in which I got a "big girl's job" and I realized that I need the ocean. Two years of living surrounded by overpowering, claustrophobia inducing mountains and I am happily back in Nova Scotia. Breathing in the salty air and feeling the thick mist of the fog on my face. Love.

Along the way I realized that I should have been more of an activist and as a result, EcoYogini was created. I love yoga, although am not so great at it and have other spiritual leanings (Goddessian) and I feel very strongly about the environment. Lille from Woodstock Lily, found me here and since has been so completely supportive of some light of Writer in there that I cannot even begin to know where to thank her.


Many Blessings and hope I can nurture this fledgling Writer!
Posted by Eco Yogini at 4:36 PM 7 comments:

Since the release of my novel, "Husbands May Come and Go but Friends are Forever," I've been researching non-traditional ways to promote. I've found a new tool called the Social Media Release (SMR). It replaces the old standard press release and the distribution is quite different. For more information, a sample, and some helpful sites, go to my website www.judithmarshall.net and click on my blog.
Posted by Judith Marshall at 11:38 AM 3 comments:

Be careful what you ask the Universe

Hey, Sharni again - thought I'd share a story I wrote a little while ago regarding a terrifying experience I had - wonder if anyone else has experienced anything like this - and how did they react? I laughed -- out of sheer terror ....
I was going to add a picture here to accompany this - but couldn't find one appropriate...
........Scary Moments...
About three years ago I was down on the ground in the foetal position praying for my life.
Three armed bandits equipped with a gun, a machete and a sledge hammer were standing over some twenty of us drinking in the beer garden at an upmarket hotel in Double Bay in Sydney.
A few seconds earlier we'd heard them shouting “Get down on the F****** ground ” , enforcing the command with a gunshot.
How had I ended up in this mess?
Only three days earlier I left the one horse town I was living in for a brief return to Sydney Town where I had been working and living for several years.
As I packed my overnight bag I was wondering whether this trip might make me feel that I should shut up shop in my quiet little town and return to big-city action.
My first two days were filled with lunches, theatre, clubbing and other twenty-something amusements so on Sunday night after a frantic day of shopping my best Sydney buddy Carly and I retreated to her Rose Bay home to chill out in front of the television.
Time somehow disappeared and at 10.30pm we were still rolled up in our blankets on the couch.
At that point we turned to each other and laughed “Are we grandmas? What are we doing at home, we don’t have to work tomorrow! Lets get amongst it! ”
So after tossing the dice over several likely establishments, as fate would have it we decided on the Sheafe in Double Bay and took a cab to New South Head Road.
At this time of night the hotel is normally overflowing with swanky party people, but we noticed it was oddly quiet.
Perhaps the Universe was trying to warn us?
We ordered some vinos and made our way out to the beer garden to have a relaxing drink with a dozen or so other patrons , some of whom appeared to have been there all day.
Suddenly the quiet buzz of the garden was broken by the most horrific shouting.
My first thought was that it was just a drunken fool – but I turned around to see a vision that hasn't left me yet : three masked men – one yelling “ Get down on the ground” .
At first everyone thought it was just bad street theatre and continued drinking.
“This is not a f---- joke” the bandit yelled and fired a gun to ensure we took him seriously.
Carly and I dropped to the ground clutching each other's hands and falling into the foetal position.
I've watched scenes like this on television, but my real-life reaction was a little less predictable.
Certainly tears were rolling down my face but, probably out of complete hysteria, Carly and I were both
laughing uncontrollably .
At the same time I was thinking how I still had stuff I wanted to do with my life , how much my body was going to suffer when they shot or stabbed me and and, oh God, how I didn’t want to die.
I was thinking of the Columbine Massacre (this was the day before the Virginia Tech one) and suddenly felt empathy with those victims.
At this point I was not seeing this was as a pub robbery – if something went wrong I knew I could be involved in a massacre.
My life and those important to me flashed before my eyes.
I told Carly I loved her and then started praying for my life, all the time in some sort of hysterics.
The sheer terror had us reacting in the strangest ways.. “If they catch us laughing, pretend we are crying” Carly hissed at me.
My heart was racing, my mind was thinking a million things at once.
I could hear the guy lying on the floor next to me calling the police on his mobile, and I was worried that the bandits would include us in their reprisal if they heard him.
If you asked me how long we were down there I couldn’t tell you, but after what seemed years Carly said to me “It’s Ok you can get up now” .She was certainly the calm one of us in this scenario; I was still frozen on the ground.
“How do you know?” I asked as I warily popped my head up.
Then I realised that people were standing once again and that the police and paramedics had arrived.
We learnt later that the bandits had put a knife to the barman’s throat and forced the hand-over of the contents of the safe.
The three had escaped through a getaway car stationed out the back of the beer garden.
Never in my life had I needed a reviving a drink so much.
Talk about sneaking back into Sydney for a quiet holiday!
The question I had put to the Universe: “Should I return to Sydney?” was answered.
Perhaps I shouldn’t have packed so much emotion into that question: a little symbolic sign would have sufficed.
Posted by Sharnanigans at 2:07 AM 8 comments: