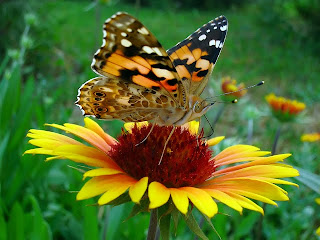 (Taken in full this time from my website, but if you like, I'd love you to drop by my website www.sharnanigans.com)
Sometimes we  get so caught up in self-righteousness and festering anger that we can lose the present moment.
This weekend, a side of me I don’t like very much reared its ugly head.
Thankfully I was bought back down to Earth by a butterfly.
Yep don’t adjust your goggles, I was literally pulled out of my dark hole by a good old fashioned, wing flapping, flower hopping butterfly!
Who’d have thunk it?
I don’t know if there was a major planetary collision, or if the fairies that took my sleep gave me a severe case of cranky pant-it-is from hell but the last few days I have been in a really bad way.
The Cowboy and I have not been seeing eye to eye, nor have our eye to eyes been seeing much sleep, probably the cause of our eyes not meeting.
We decided a fix of the outdoors might help matters.
We packed up Monte and went for a walk to watch the cricket at the park.
The walk was mostly in silence though inside I was boiling.
Halfway I decided I couldn’t keep it inside anymore and unleashed a can of crankypants.
I picked a fight.
Cowboy failed to respond to my advances.
I could feel my frustration rising rapidly.
My fuse  was about a millimetre long and it short circuited.
Irrationally, I did an about turn and decided I wanted to be on my own.
I started legging it in the opposite direction.
“Where are you going?” Cowboy said bemused, pram in hand
“Home!” I yelled dramatically.
He yelled back to stop being so stupid.
Easily convinced I sauntered back over and decided that I would go along with them, I just wouldn’t talk.
This plan succeeded for about ten seconds before I launched into it again.
The more I spoke the more I became  wrapped up in my self-righteousness and hard done-byness (both legit words).
I had temporarily forgotten that the apple of our eyes, Monte, was right there sitting up in his pram soaking in the parental atmosphere from hell.
Just as I was about to take a short breath and start my next rant, Monte let out a grunt and a point and I noticed he was looking at a butterfly.
“Butterfly!” I said – briefly breaking out of cranky pant mode.
He continued pointing.
I lost where I was in my rant and too looked at the butterfly.
It was a particularly beautiful butterfly exploding with bright colours.
It was not one of those drab little moth like ones that you see everywhere.
It was certainly quite the  extrovert.
This butterfly was working it!
It was shakin’ its butterfly bootie all over the shop,  spinning and fluttering in front of the pram.
As we kept walking I noticed that the butterfly kept up with us.
I was captivated!
I hadn’t noticed at the time, but it had caused me to lose my train of thought.
I had shut-up!
I had never noticed a butterfly hanging around like this before.
For more than half a block it swirled and fluttered in front of us.
I wondered if it was some sort of angel purposefully captivating me to snap me out of my anger-fuelled monologue and into the moment.
Was it a magical butterfly sent to transform me from the ugly creepy crawly that I was acting like into someone more carefree, beautiful and present.
I stopped.
I listened.
I returned to the moment.
I looked around for the first time that day and I really noticed what a beautiful day it was.
I looked down at my son and at Cowboy and took a deep breath. I felt like I had just stepped out of the jaws of hell and how good it was to get out of there!
It was a nice day, I was with my family and we were walking to the park.
That was it!
What the hell had I been on about?
Then just as quick as it appeared the butterfly disappeared.
We went on to have a lovely afternoon watching the cricket. The memory of my angry rants left behind.
When we returned home  I read Monte a book.  A colourful book filled with farm animals.
He kept closing the book up and pointing to the tiny publishers logo on the back of the book.
“Yes, that’s nice” I said returning to show him the cows.
Determined, he would continue to close the book and again, point at the logo.
I had a closer look.
The logo was a little butterfly.
Monte looked at me, I swear, knowingly.
I don’t know if you believe in signs or little messages from beyond, but I am convinced that the butterfly was there to remind me to look at the beauty in the present moment.
It also reminded me that we all have our caterpillar days, the key is to leave them in the past, transform ourselves and look for the beauty in the present moment.
Posted by Sharnanigans at 2:50 AM 3 comments: