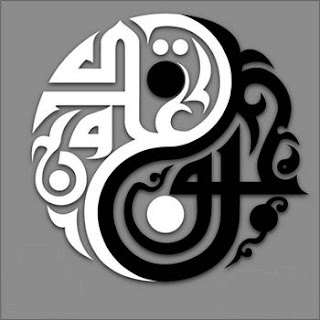 I read this beautiful and simple Buddhist saying somewhere, a number of  years ago, within a moment that stood alone, separate, as if waiting for me. It was that poignant, that perfect:


"Your greatest enemy is your greatest teacher"
I knew this in every fibre and twitch of my being as soon as i read it. But it took me a few moments longer to process it with my sludgy brain. So I searched for an example to test the theory. I imagined my greatest enemy, and who came up surprised me. She was my opposite in personality - we had clashed for years and years - yin and yang -  though I did not think of it that way - as there is harmony and balance in ying and yang.  What I did think of was how as opposites, we always talked over eachother - as if we were in different worlds. I was never able to let things go when she said things I judged to be wrong-minded, or untrue or...whatever they were doesn't matter really - when two people clash there is plenty of fodder. She is a member of my extended family, so she is someone I could not avoid, she is part of my life.

I found it rather unpleasant, ok, terrible, to think that she could be my greatest teacher. She, teach me? What could she possibly teach me other than things I don't agree with? She was very conservative, I was, well, NOT. She seemed to only think of money, numbers, counting, counting...i never had money to count...She was reactive, I was certainly calm...er.


Clearly she needed to change, not I...
Aha.
voila.
bingo.
I knew as soon as I said this, my old mantra, that it was holding me back - that it actually cemented our tense relationship. This new little line i read forced me to realize that  I needed to change, not her. Sure, she might need to change as any human being needs to, but that was not my business to decide or worry myself over. My part was to change myself - and learn, from the enemy.

I did learn. And it was not pretty. I found that I was full of pride, that I was stuck in my ways, that I was not open to her differences, nor was I ready to celebrate anything good in her. She was the devil and I liked it that way. Such a heavy burden this was for me! Clearly, I was my own enemy.

It was slow, but I started to open myself up, try a new way of seeing. For example, we thought very differently - I excelled at abstraction, she at very concrete ideas. I could explore an idea and never stop exploring, she needed only to explore it until she found a way to make it useful or not, the end. Not a bad way, actually...I started to see her opposite ways as not inferior, but as an alternative way with wisdom of its own. I softened. When I started to perceive her with  fresh eyes - being open to her possibilities, her goodness, I began to be more free within myself - I will explain.

I realized that what I was doing is very similar to what psycologists call "oppositional identity formation" - my "good" identity was directly dependent on sustaining her "bad" identity - this meant I had to feed the monster - my idea of her being a "monster" had to be sustained by examples and stories. Anything good that arose from her I ignored, as it would not uphold my idea of her or of myself in relation to her. In other words, it was all about my ego, my idea of myself.

Ego is not bad necessarily, it just has to stay in check, in balance. Yes you should stand up for yourself at times, you should have a strong sense of self and your abilities, but no, you should not be so tied to your ego - your positive identity, that you cannot accept when you are wrong, that you crumble when others shine a light on your not so positive self, that you act in very strange, very unhealthy ways, very needy ways to maintain that positive identity -  that grand sense of self not grounded in what's real. I had to stop feeding the monster, so I could get a better look at reality, and rest in what is real - she is good, I am good - enjoy.

wow I learned a lot from my enemy.  And she had no idea.

But what she does know now, is, that I appreciate her very different abilities, especially the ones that urked me before, and that though things aren't always smooth, I do find her funny and full of heart, that I admire her energy and her forthrightness... and that we are not enemies...

I am no longer threatened by her goodness.

Identify your greatest enemy - be open to what they can teach you - it is a most difficult thing, but you can come out the other side better for it.