Also on my blog.

Sitting across the board room conference table you have a disagreement with your colleague -- do you shout and tell them to shut up because you know you're right? Do you stand up defiantly, raise your hand, and say, "You are useless. You have no idea what you're talking about. Get out!"

Do you cross your arms against your chest and with piercing eyes, say, "So what? I don't give a damn!"

Do you attack their personal beliefs, drag their marriage or sexuality into your rant, and shower profanities?

You would probably try to rationalize in a calm voice. You would most likely say something like, "I guess you're trying to say ABC, but hear me out because I'm saying XYZ."

You would, if you were talking about something diametrically against their point of view, perhaps even go to the extent of saying, "You are looking at this from your perspective, but the way I see it..."

Maybe you'd count to 10. Think and rethink before you blurt out. Wonder if it's belaboring a point and a waste of everyone's time.

Maybe you'll even put yourself in the other person's shoes and decide to give them another chance.

What you wouldn't do is call the person names or even obliquely try to drag any personal issues, theirs or yours, into that professional conversation.

There is something that holds you back from shouting like a two-year-old and having your voice heard. Something that tells you it's inappropriate. Something that restrains you from being rude, uncivil, impolite, and crass.

It may be the fear of getting fired. Or being judged. Or just holding a high personal and professional standard. It might also be an ingrained part of your being that came from a good education.

You might disagree completely with a person, but you wouldn't be uncivil.

In most cases, the same behavior transfers to personal relationships.

Maybe you fight a little harder, show your emotions more openly, point fingers, and sulk with your loved ones. But even then, you don't intentionally, at least, disrespect them. You try not to generalize and either try to bring the argument to a resolution or agree amicably to disagree in favor of living under the same roof peacefully.

But when it comes to conversations on the Internet -- be it instant messages, responses to "controversial" status updates or tweets, or even blog comments, that something that keeps us civil in other settings doesn't seem to apply.

Don't get me wrong -- most people are as courteous in their written communication within the social media sphere as they are in real life, but there are a significant number that shock me with their smuttiness.

They hurl abuses. Get personal. And stray off-topic just to show a person down.

No restraints. No courtesy. No room for agreement.

No room for anything except their point of view.

And not all of them hide behind the cover of anonymity either. When they post something extremely offensive in response to an NPR report on Facebook or tweet a rude personal, albeit public, comment to a Washington Post reporter, their names and Twitter handles are visible to all. Yet, they somehow feel protected. For some reason the intertubes provide them with a notion of safety. Of being untouchable.

This is where they can give someone their piece of mind. Someone they don't even know. Someone they've probably never met ... and never will.

Maybe that is the crux of the issue... 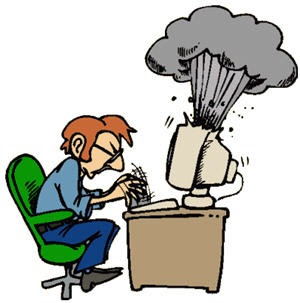 The fact that this "someone" is "somewhere" in the ether -- a real person but with no real significance.

And if they don't matter -- heck, why care about them? Why bother with being civil? Why spend time being polite? Why not just dump all your angst on this person and move on ... to your next target?

And I guess that's why people uninhibitedly curse on the road or flip off motorists. They don't know 'em, so how does it matter?

But isn't this behavior the most telling of one's character?

Doesn't this devil-may-care attitude and crassness online reflect on who they are as a person more than anything else? The internet just brings out their true nature. This is the real them -- callous, close-minded, narcissistic, stubborn men and women who refuse to acknowledge the existence of another perspective. They will argue to death with a stranger who "doesn't matter," so to speak, just to satisfy their egos.

And if you're on the receiving end of such bashful commentary, what do you do? Do you also stoop to their level to show them who's the man? Or do you take the high road?

It's easy to get sucked into the rudeness spiral. But, just as in real life face-to-face confrontations, you control your actions online. Just as you wouldn't flip off someone you know, just as you would tell someone being rude to you that it's inappropriate and you don't appreciate it -- you ought to be the calm, rational, composed person online.

I'm not advocating taking crap from anyone, but don't lose your decency.

You're better than that.

This woman behind the curtain requests an honorary ThD

Towards the end of The Wizard of Oz the Wizard steps out from behind a curtain and is revealed as a short, bald, ordinary man. His trickery, machinery and a powerful microphone have guaranteed his power in the Emerald City.

We all have an Oz behind the curtain pulling the levers.

You know what? I have been the Oz in our family for 21 years. I am the woman behind the curtain, who has consistently organised and planned holidays, remembered birthdays, mentally tracked finances, billing periods, and nutritional needs. I have kept a running tally (in my head) of the amount of bread and milk, toilet paper and washing powder in the cupboard and performed the role of our home’s mental calendar for all appointments and engagements.

I have been the researcher for all child related care, discipline, safety, health, and education options. This information springs instantly to mind as required. I learned a whole other language in my apprenticeship. But it's not written down.

I could be wrong but in my experience it’s often the Dads who are responsible for their own particular activities and Mothers who take on responsibility for all family related mental tracking.

Think about it. With mental tracking there is a lot of stuff in the air, spinning like china plates on sticks. Mothers just have more to lose if something get’s dropped. That’s a lot of mental exercise.


So I’d like a ThD just like the one awarded to the scarecrow by the Wizard of Oz.

A ThD? That’s a Doctor of Thinkology.