If you saw a sad stranger in the street or in a shopping centre would you go up and give them a big unconditional hug just to remind them that they matter and that you see them and care ?

What about if you were over at a friends or relatives place and you were faced with the same scenario, would that make a difference ?

What would it take for you to offer unconditional support to a stranger ?

And I guess more importantly, what is stopping you from caring freely without barriers ?

Quite often you read in these Blogs of “ Hallelujah Moments ”, moments of clarity and understanding at such a fundamental level if is prophetic. I had one of these such moments the other day when I had to go to the local music store to collect a new trumpet case I had on order for my son.

Now before I go any further, I need to paint a picture of me, you need to understand the context of the event to fully understand the event in itself. Now I am a 42 year old male who tops the scales at about 180kg, I have short hair and a moe & goatie, I was in track suit pants and a simple T-shirt with thongs on my feet. I certainly do not look frail and I certainly do not normally look like the type of person who would normally care to much about those around me, I certainly do not look like the type of person that would take kindly to a stranger getting up in my face uninvited.

Yet as I entered the store I was instantly greeted by a small framed man in his 60’s, I was greeted with a heartfelt hand shake and a series of quick fired questions about who I was, How I was and what I was doing in my life at the moment. Now normally I would be the first to jump back in defence to reclaim my personal space as I am not normally a very good people person and very much defend my 6ft personal space and freedom. Normally a person getting up in my face so quickly and aggressively would rattle my cage and either fire up an aggressive defence behaviour or send me running. But for some reason this rather confronting and touchy feely stranger did not set off my alarm bells and flashing lights, I actually found myself rapidly drawn into his aura and genuinely turned my attention and focus to him, for some reason my welcome stranger look familiar to me both in looks and behaviour, all of which convinced me to relax into his company.

Now after having my hand shook for what seemed a life time, my new welcome friend decided to give me a huge heart felt embracing hug with all the trimmings of his head berried into my chest as if we were long lost brothers who had just met for the first time in 50 years. Once again for some strange and inexplicable reason I felt comfortable in his embrace and found myself returning his affection unconditionally.

My new best friend was not a big man like me, in fact he was quite a diminutive figure compared to my huge frame and when we hugged he disappeared compared to me. Yet hugged we did, two complete strangers in the middle of a music store !

Now my welcome stranger talked fast, very fast and he spoke in such a way that he kept repeating himself. It was like he had too much to say in far to shorter time and because he was trying to cram a life time of conversation into a moment in time and he could sense that I was having trouble keeping up with him. My friend kept telling me that we should love unconditionally, that we should never be afraid to show our love as we never know what life will give us.

At one stage our conversation changed direction and my friend asked me what I am doing at the moment, I told him that I was not doing much as I am out of work and just enjoying doing nothing for a while. Suddenly the conversation once again took on a frantic pace as I was advised that life is too precious and short to do nothing, everyone should be doing something, anything.
.
My friend then stepped back and shook my hand again and then pointed at a promotional poster that I was standing next to and proudly pointed out to me that the man in the picture was in fact him, although many years ago. David Helfgott then stepped straight back into me and continued to give me another genuine soul search hug.

Now some of you may instantly know of David, others may not but David is a world renown Concert Pianist who was immortalised in a 1996 film called “ Shine ” in which Geoffrey Rush won an Oscar for best male actor. David was a child prodigy who suffered a nervous breakdown and was lost for many years before once again finding himself and his life.

David never once hesitated in greeting me warmly and unconditionally in a way that I have never experienced before in my life, he was an open book and an open free soul in a way that I cannot hope to describe in words. It was obvious that he had been born with or perhaps lived a life that had given him a unique insight to life.

Now, as I sit back and write this Blog I can’t help but reflect and respect how free, genuine and open David lives his life, how much courage that must take and how much I would love to be able to relax enough to be that open with people. I can’t help but think that David has hit the nail right on the head and that we all should be living such and open and warm life.

Thank you David for being you and God Bless. 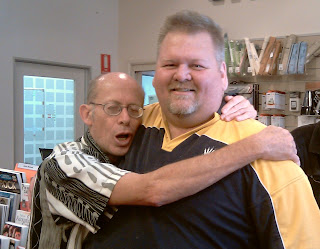 You May Have Noticed

I am a machine gunner. That's right. You heard it here. My confession regarding my procrastinatingly, annoying, downright disturbing, blogging habit of machine gunning other people’s blogs. I can’t help it. Ok, maybe I can help it but we all know I have no intention or hope of ever actually changing so … Well, deal with it or don‘t. I leave that up to you.

I really truly do mean to read and comment on other writers blogs on a fairly regular basis. Daily would be great. Weekly would even be acceptable. Monthly usually works out … if I’m lucky…and motivated…and the moon is rising in the fifth house of the seventh sun or something along those lines.

Anyway, for those of you who don’t have a clue as to what I am referring to, maybe you are blogless or you could care less if I comment on your blog, please allow me to explain myself. As if there could ever really be an explanation for me. But I digress.

So, you write your wonderful blogs. Then you read my foolishness. Thoughtfully, because that’s how you are, you leave your funny, charming, sweet, comments on my blog. Unless you’re one of my incredibly testosterone driven readers, then it’s a laughable attempt at big boy humor. Either way, you comment and I love it. I am validated. I can keep writing. My life is complete. Nevermind. The proper thing to do at this point would be to read your blogs and leave equally funny, charming, sweet, comments to complete your lives. I am even capable of leaving incredibly testosterone driven comments since my hysterectomy. But I put it off and plan on getting to it, then before I know it, weeks have mysteriously disappeared into thin air.

Eventually, I find a few hours to hide away and do some blog reading. I choose one blog , read all 1000 posts I missed in the last month and comment on each and every one. Then, when the poor schmoe opens their email, there are 1000 emails from me, each filled with witty, wonderful drivel meant to fill the blogger with peace, joy and happiness.

Ok, let’s be honest. I know I am driving some of you crazy with this habit of mine. I truly wish I could sincerely say I am sorry and that I will never do it again. Unfortunately, I am locked, loaded and ready to roll. You might want to take cover…soon! 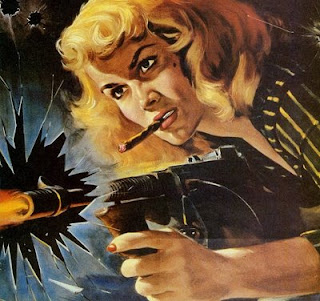