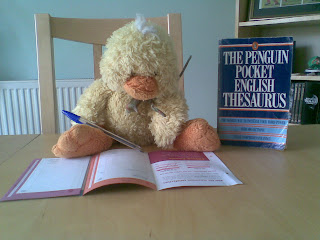 This weekend we were burdened by that most thoroughly unwanted of guests, the class teddy. You know the kind of thing. Most classes have them these days, a teddy of some description that travels around from home to home, spending qual ity time with their classmates!
They always come with a diary that must be fi lled in, to detail the toy’s visit into your home. This diary lets your teacher, and all your child’s friend’s parents know what kind of a parent you are. This book is a complete assessment of each of the children in your child’s class, allowing the parents to decide which of these children are worthy of being a friend or potential future partner for their young charge.

Or at least that is what you think everyone is doing.
The pressure is on.

Last time Sydney Duck came to visit I wound up in trouble. It had been left to me to supervise my son, Daniel, as he wrote the diary. I had also been left in charge of the boys on the day of the visit, because my wife was out at a meeting or playing netball or drinking (I forgot to listen when being told what she was doing so cannot be accurate I’m afraid).

The result was this…
“Sydney’s Diary – Daniel’s house, 10th April 2010
We came home to Daniel’s house and were going to watch Doctor Who on TV, but Daniel’s dad had accidentally deleted the recording so we watched Magnificent Men in their Flying Machines. Daniel’s dad had missed the end off the recording so we watched Star Wars instead. Then we had Dominos Pizza for tea and watched Pulp Fiction while eating sweets for pudding.
At bed time Daniel and his brother kept getting into trouble for jumping around on their beds, hurting each other and saying rude words. Daniel’s dad kept saying his prayers. I think he was worried about something, because he kept saying ‘Oh God’ a lot and ‘She is going to kill me’. Eventually we got to sleep, but were woken up in the night by a lot of shouting, Daniel’s mum was upset about something but we couldn’t quite hear what – though I think she must have seen the film too, because she knew a lot of the words from it.”
Some of the other parents have been giving us some funny looks since that, and I notice Daniel has not been invited to many birthday parties this year.

My wife pointed out that we are supposed to be middle class and therefore we have to get the diary right – we must try harder next time! The rest of the class must see how wonderful we are at parenting!
And so this time when Sydney came to us for a whole weekend, I have taken no chances.

I wrote out his diary entry on the computer, printed it out and stuck it in the diary, pretending that Daniel had done it (middle class point number one – has access to an IT suite and can use it, check!)
As I believe that I am not the only parent that has suffered this kind of pressure, ensuring that your parenting skills are shown to their best potential within a school teddy diary, I have decided to copy the entry out here for you to use. You will need to change some of the names and details in order to make it personal, otherwise I think it should cut and paste into your life fairly easily.

Of course, it took me quite a while to write it, so the boys were downstairs watching TV for ages. I don’t know what they were watching but the smile was wiped from my face earlier; Daniel cut short the conversation on his play phone, slamming it down and saying “That was my HOE Dad, giving me earache again” I assume he must have been watching a gardening programme.
I can declare that it has worked; word has clearly spread even further than his own school friends. After only three days we have received an invite to Charles Rossiter-Smythe’s birthday party. I’ve been a bit puzzled, because the theme for the party is “boarding school attire”? I’m going to make him an Eton Mess pudding to take, that should cover it.

Any way – please use this if needed…

This weekend I went to Daniel’s house. I was immediately impressed by the cleanliness of the house. The bathroom was particularly clean. The large Schuller kitchen shone beautifully, its contemporary design somehow complimenting the traditional look of the large Aga in the corner.
The boys immediately changed out of their uniform and went out in the garden to play. Daniel’s dad came out and we all played a game of ‘times tables catch’ where if you dropped the ball, you had to recite the times table for the number of bounces before you picked it up. It was such fun. 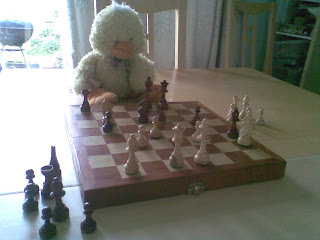 Later (as the organic, locally produced beef casserole was cooking in the Aga) Daniel’s Mum came out and sent us on a crazy garden hunt. We had to find an insect each, bring it back and then discuss the pros and cons of the creature. Did it help the garden in some way or harm it? Then we had to write about it in our garden hunt diaries before letting it go. It was such fun.The casserole was delicious and the Kumquat and Lychee dessert was amazing.

Afterwards, we helped load the dishwasher, and I helped Daniel do his homework before playing chess.
At bedtime, Daniel’s dad read us some poems from a book about saving the whales (I had no idea that humans had been so terrible to these mighty mammals, it really made me think). 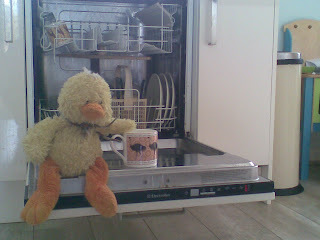 On Saturday, we all went for a long hike around the countryside, discussing the flora and fauna as well as the wildlife in the area. Occasionally, if someone said a new word, Daniel’s mum would shout “spell it” and we would all laugh as whoever it was had to try and spell the word. We went up one hill and could see that on one side the land was beautiful and covered in trees, but on the other side the terrible decay of commercialism and greed had ruined the view with power stations spewing smoke into our atmosphere. The harm this was doing was all too apparent, as the roads and houses spread evermore towards the countryside on the other side of the hill. The sight of this really made me think.
On Sunday, after church, we went to help clear up litter on the council estate. We all walked along with bags and filled them up with rubbish. The poor people on that estate don’t have bins like normal people do so they have to throw their food wrappings out of their windows I think. I don’t think they noticed us doing this because their 50” plasma TV’s had the football on; Daniel pointed out that if they didn’t spend all their money on TV, cigarettes and beer, they would be able to afford to come on school trips and pay for their own school dinners without using the vouchers. This really made me think.

In the evening (after a delicious Ratatouille and fair trade chocolate soufflé) we played historical charades. You had to pretend to be someone from history. Daniel was Neil Armstrong, and his dad was Oliver Cromwell. We all really laughed when Daniel’s mum pretended to be Emily Wilding Davison, throwing herself under the King’s horse. It was such fun, but it also really made me think.
At bedtime Daniel’s mum did some fun maths flash cards with us instead of a story, we really laughed as we did the sums.
Later, when Daniel and I got up in the night to go to the toilet we heard Daniel’s mum preying again, but unlike at church, she was really shouting “God” and “Jesus” with passion. She must be very devout.
I really enjoyed my stay with Daniel; and, as we sat in the four wheel drive for the half mile distance back to school, I hoped that I would be back soon, because it took ages to stop itching after I went to Wayne’s house that time, not to mention the boredom of just watching that big TV all weekend!”